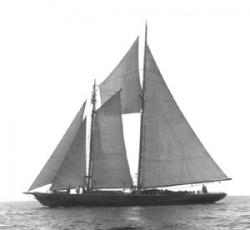 WHOI leased the schooner Blue Dolphin for the Labrador Expeditions and the Arctic Institution of North America. She made cruises to the Labrador coast during the summers of 1949, 1950, and 1951. In 1953 Blue Dolphin was used for work on the continental shelf, and Georges Bank and down to Bermuda. Blue Dolphin made a total of 11 cruises and was involved in physical oceanography, marine biology, some coring, and depth sounding while looking for seamounts. She was returned to Boothbay Harbor, Maine, on 9/11/53.
Length:
100'
Beam:
22'
Draft:
12'
Dates of Afflliation with WHOI:
1949/1954
Built:
1926
Builder:
Shelbume Shipbuilders Ltd., Nova Scotia